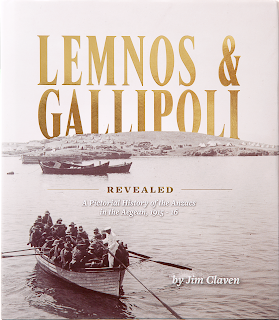 You can now purchase your own personal copy of our Committee's Lemnos & Gallipoli Revealed by Jim Claven from two new bookshop outlets.

Jeffrey's Books is located at 140 Glenferrie Road Malvern. You can call them on 03-9509 5133 or email them on: info@jeffreysbooks.com.au.

Thanks to our Vice President Christina Despoteris for organising this distribution of our books to these bookshops - with more outlets to follow. 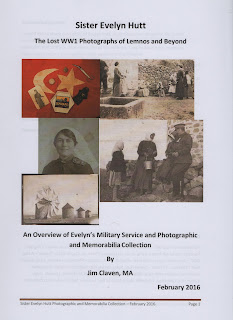 Over the past few years it has been my pleasure to have assisted a number of families in their donation of their Anzac memorabilia and private collections to the State Library of Victoria in Melbourne. Each of these collections concern service in Greece in either the First World War or the Second World War.

These donations have together added immeasurably to the Anzac collections of the Library, one of Australia's premium archival institutions.

These collections concern the following Anzacs:

To assist in establishing the importance of each collection, I prepared a short document for each, outlining the contents of the collection, a biography of the Anzac concerned, their wartime experience and how this is reflected in the collection. Most importantly I reviewed and reproduced many if not all of the photographic elements of each collection within the documents.

A copy of each of these was deposited with the Library. The front cover of Sister Hutt's booklet is reproduced above, the others below. These have now been catalogued and are available to be accessed.

You can order to see a copy of the overviews by using the following link:

You can also read more about: 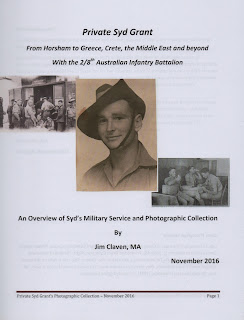 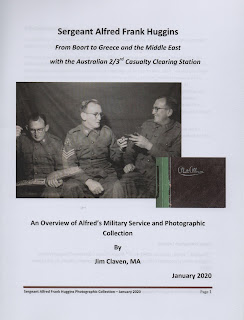 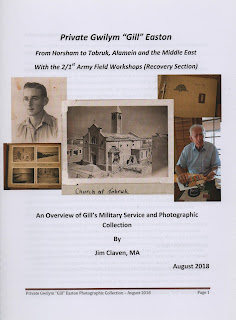 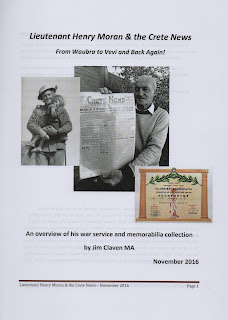 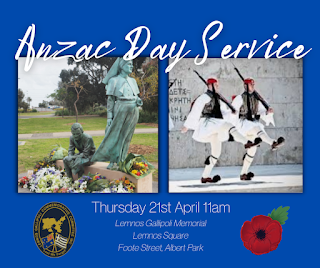 The Lemnos Gallipoli Commemorative Committee will be holding our first official "Anzac Day Service" at the Lemnos Gallipoli Memorial in Lemnos Square and the Evzones - the Hellenic Presidential Guard - will honor us with their presence.
The Service will take place on:
Thursday 21 April 2022
11.00 am
Lemnos Gallipoli Memorial
Lemnos Square
Foote Street Albert Park
We are grateful and honored that our first official Anzac Day Service will include the participation of the Evzones, the Hellenic Presidential Guard.
This bronze Memorial, of a nurse protecting a weary soldier, was sculpted by renowned artist Peter Corlett OAM. It recognizes the important role of the Greek island of Lemnos in Australia's ANZAC story and is dedicated to the Australian nurses and soldiers who served there during the Gallipoli Campaign in 1915; to the 148 Australian soldiers who remain buried there; and to the local community who supported them.
Our 2022 Anzac Day Service at Lemnos Square will include an address, a wreath-laying ceremony, the national anthems of Greece and Australia, the reciting of the Ode, and of course the guarding of the Memorial by the Evzones. Their presence further enhances our connection between Australia and Greece and will highlight the role that Lemnos played in the Gallipoli Campaign.
The Lemnos Gallipoli Commemorative Committee thanks the Victorian Government for making this visit to Melbourne by the Evzones - the Hellenic Presidential Guard possible and the Greek National Day Council for including this visit to our Memorial.
We would be delighted if you could join us for this important event.
Note that there will be a limited number of wreaths being laid during the service by Official Guests.
Lee Tarlamis OAM MP
President
Lemnos Gallipoli Commemorative Committee
Posted by Jim Claven at 08:15 No comments: 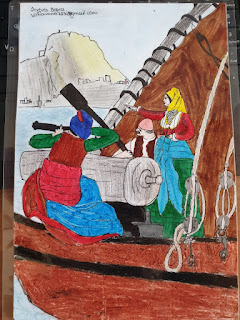 The Lemnos Gallipoli Commemorative Committee (LGCC) marked its tenth anniversary in 2021 with a number of activities showcasing the Lemnos connection to ANZAC; and more broadly the 200th Anniversary of the 1821 Greek Revolution, the Hellenic connection to ANZAC. What better way of doing this, than through the eyes of our youth.

“In 2018, during the 100th Anniversary of the Armistice of Moudros celebrations on Lemnos, the LGCC announced the establishment of two sister school relationships, one of which was between Albert Park College and the Moudros Senior High School”, Christina Despoteris the Vice President of the Committee said.

One of the activities organized by the LGCC in collaboration with the participating schools was an Essay, Poetry and Art Competition. The theme of the Competition was “Greece 1821 – 2021 Celebrating 200 years of Independence”. Students also focused on more specific themes including Heroes of the Revolution, Women of the Revolution, How has the Revolution affected Life in Modern Greece, Historical Markers that shaped Greek Society 1821 – 2021, The Influence of Hellenic Civilization on the World, How Hellenic Civilization has influenced Australia, The Greek Australian Connection.

The Competition was open to all students who participated in the sister school program in 2020 and 2021. Winners were chosen from each year level.

“The judges were very impressed at the standard of the entries. The essays and poems conveyed a sense of insight into the topic, articulating thoughts and arguments succinctly and clearly. The Art works which were submitted were of a high standard. They stood out for their creativity and originality of the theme, as well as the artistic composition and overall design” Ms Despoteris said.

“Today we are announcing the winners from the Moudros Senior High School”, Ms Despoteris continued.

Nicole Dimou, a Year 10 student, who impressed the judges with her essay about “The Exodus of Messolonghi”, the island of the civilian revolution; and

Sofia Voria, a Year 10 student, with her creative and colourful depiction of Greeks in national costume on a ship firing cannon at the shore. Sofia's work is pictured above.

“As the Co-ordinator of the competition and the sister school program, I was delighted with the response, as well as with the standard of the entries we received. These types of activities keep alive the historical memory, help cultivate the Greek language and further motivate and inspire students to feel proud of their Hellenic heritage” Ms Despoteris said.

Thank you to the Principal, Mr Stylianos Karagiannis and Ms Theodora Lymperi, the co-coordinator of the program who work tirelessly throughout the year encouraging students, preparing presentations, and organizing special events and Zoom sessions between the two schools.

We all hope that the time will come when the Lemnian school visits Melbourne and when the students from Albert Park will be able to travel to Greece to cement the relationship that they have developed over the last few years.

The LGCC will provide a book prize – Jim Claven’s Lemnos & Gallipoli Revealed – A Pictorial History of the Anzacs in the Aegean, 1915-16, for the two winners. 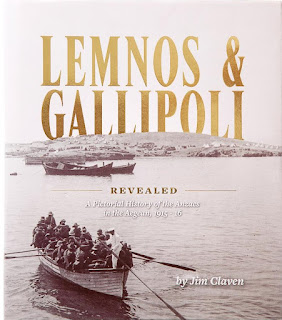 End of Year Message from the President 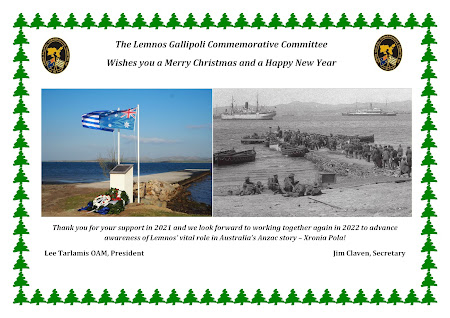 Well here we are at the end of another year.

The last two years have been particularly challenging for all, including commemorative organisations.

Despite these restrictions we have been able to continue to advance our program of building awareness of the Hellenic link to Anzac in general and the role of Lemnos in the Gallipoli campaign in particular. I thank all members of the Committee for their work at this difficult time.

We have continued to maintain our cooperation with the authorities on Lemnos as well as our regular online sessions linking schools in Melbourne and on Lemnos.

We have progressed plans to extend the Anzac Trail on Lemnos, commenced in 2018 with our Australian Pier Memorial. Two new bronze commemorative plagues have been created – commemorating the Royal Australian Navy at Lemnos in 1915 and Lemnian Anzac Sapper Basil Demetri Passa from Kontopouli on Lemnos. These will soon be transported to Lemnos in advance of their installation on the Island, hopefully in 2022.

We have also participated in the Australian Government scoping study for a commemorative site on Lemnos and look forward to its implementation in coming years and assisting where we can.

We were successful in our proposal to Melbourne’s Shrine of Remembrance for the holding of an annual commemorative service in honour of the Australian’s who served in the Salonika Campaign 1915-18.

And we have continued to publicize the Hellenic link to Anzac through the many media stories we have been successful in having printed. A big thank you to Melbourne’s Neos Kosmos in this regard.

The Committee places on record its appreciation of its outgoing Executive Committee Members – Ange Kenos and Nikolaos Kydas. We look forward to continuing to work with both Ange and Nikolaos in the future.

We look forward to a full program of events and new projects promoting the Hellenic link to Anzac in 2022 and hopefully seeing you all again in 2022.

Finally, wishing all of you a Merry Christmas and a Happy New Year.

The Shrine has advised the Lemnos Gallipoli Commemorative Committee that this year’s Armistice of Mudros commemorative service will be held online.

This service was initiated by the Governors of Melbourne’s iconic Shrine of Remembrance on the proposal of the Lemnos Gallipoli Commemorative Committee. The first service was held in 2018 and the following year was held in conjunction with the unveiling of the special Lemnos 1915-16 Plaque and Tree dedication in the grounds of the Shrine. It has been held every year since.

The Armistice was signed by British Admiral Arthur Calthorpe, representing the Entente Powers (as the Allies were then known) and representatives of the Ottoman Empire. The signing took place aboard the Royal Navy warship HMS Agamemnon while anchored in Mudros Bay, Lemnos, amongst the large Allied naval fleet that assembled there for the purpose and to take part in the coming occupation of Constantinople and the Ottoman Empire. Australian and Hellenic warships were part of this fleet.

As many readers will know, the Aegean Island of Lemnos played an important role during the First World War. Only 50 kilometres from the Dardanelles, it operated as an advance base during the Gallipoli campaign, with major medical facilities for the treatment of the wounded and sick from the campaign on the Peninsula. Amongst the over 1,300 Allied service personnel buried in Lemnos’ war cemeteries are over 200 Australian and New Zealand war dead.

Shrine staff and the Shrine Guard will perform the symbolic service, including the wreath-laying in the Shrine. The service will begin at 11.45am on 31 October 2021. Members of the public can watch the service at the following link:

There is no need to sign-in for this event.

Committee President, Mr Lee Tarlamis, OAM MP, thanked the Shrine and its staff, including Dale Capron, the Ceremonial Programs Manager, on behalf of the Committee for their dedication in keeping this and the many other commemorative service going during the current pandemic.

“They have thereby ensured that the commemoration of the Armistice and the service and sacrifice of thousands continue to be remembered”, Mr Tarlamis said.

The Committee is hopeful of returning to a publicly-attended commemorative event in October 2022.

Lemnos Committee Secretary and historian Mr Jim Claven proposed the commemoration on behalf of the Committee as a result of his having researched the story of the Armistice of Mudros since 2013. He has had the story of the Armistice featured in publications from Australia to Greece and the UK, including a major feature in Remembrance, the Shrine magazine, as well as making public presentations on the Armistice at both the Shrine and at Mudros Bay on Lemmos in 2018.

Those readers seeking to find out more about the Armistice of Mudros can listen to the podcast of Jim Claven’s presentation at the Shrine in 2018 or read his article in Neos Kosmos, published on 2 October 2018, via the links below: