All are welcome to attend the forthcoming unveiling of two new WW2 commemorative memorials at Pylos and Methone.
This event will begin at 1pm, 6th May, at the Hellenic War Memorial at Pylos harbour. This will be followed by a similar event at the Hellenic War Memorial at Methone.
While every effort has been taken to confirm event details, they may change and those wishing to attend should confirm details with the Municipality of Pylos-Nestor.
The Memorials
These two new bronze plaques commemorate the Nino Bixio tragedy of 1942 and that of the Sebastiano Veniero-Jason off Cape Methone of 1941. They commemorate those who died, those who survived and the local people who tried to help them. 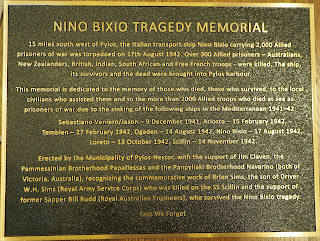 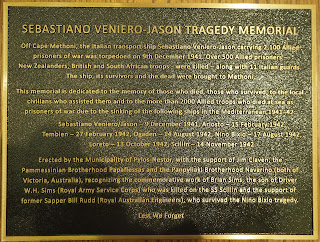 These memorials have been the dream of Australian WW2 veteran and survivor of the Nino Bixio tragedy for many years.
In August 1942 Bill was one of 2,000 Allied prisoners aboard the Nino Bixio, sailing from Libya to an internment camp in Italy. Bill found a spot on the steel mezzanine deck that ran around the forward hold of the ship and remembers it as “incredibly hot and stuffy.”
In waters south west of Greece, 12 nautical miles south west of Pylos, at 4.33pm on the 17th August 1942, the Nino Bixio was torpedoed by an Allied submarine. Only days before this same submarine had been taking on and dropping off Allied SOE agents and Greek resistance fighters on Crete and the mainland. Bill remembers “a sudden tremendous thud and the "whoompf" of the torpedo bursting into the hold.” As he made his way to the decks with the rest of the survivors, Bill witnessed more destruction and the bodies of the dead.
Over 300 of Bill’s comrades were killed in the ensuing tragedy - Australians, New Zealanders and other Allied troops. Many were killed or died in the holds of the ship, as water gushed in and debris crashed on top of them. Some – like the Scottish-born Anzac Private James Paterson of the 2/28th Battalion - jumped from the ship and tried to make their way to safety on makeshift rafts. Tragically, James died of exhaustion after days adrift in the Mediterranean.
Yet the Nino Bixio did not sink and was eventually towed into Pylos harbour by an Italian warship. Here Bill came ashore with the other survivors. The dead were buried in the local Greek Orthodox Cemetery, re-buried after the war at Phaleron Cemetery near Athens. The sole Australian amongst the dead re-buried at Phaleron was Sydney-born Sergeant Robert John Patterson of the 2/32nd Battalion. Those missing would be commemorated at the El Alamein Memorial in Egypt.
A similar story of death and survival had occurred with the Sebastiano Veniero-Jason off Cape Methone on the 9th December 1941, where over 500 were killed out of a total 2,100 Allied prisoners aboard the ship. Locals at Methone also assisted in the collection and temporary burial of the bodies of Allied soldiers washed ashore.
Until this time there has been no memorial dedicated to commemorating these tragedies.
Acknowledgements
The Nino Bixio and Sebastiano Veniero-Jason Memorials will be installed by the Municipality of Pylos-Nestor, with the support of the Pammessian Brotherhood ‘Papaflessas’ (Melbourne and Victoria), the Panpyliaki Brotherhood ‘Navarino’ (Melbourne and Victoria), Veteran Bill Rudd. It has been my own personal honor to have drafted the memorials themselves.
The memorials were made in Australia and transported to the Municipality of Pylos-Nestor, who will install the memorial plaques on 6th May 2018
I would like to acknowledge the work of George Iliopoulos, Paul Sougleris, George Saratsiotis, RitaLambros, Ioannis Mitsakos and Betty Kosmas in bringing the dream of our veteran Bill Rudd to a reality.
Greece's New Anzac Trail
These memorials are another step in the formation of Greece's Anzac trail - stretching from Lemnos in 1915, through Thessaloniki and northern Macedonia in 1915-1918, and down through the Greek mainland and across the Greek Islands in WW2. This will identify and commemorate the key locations connected to the Anzac's and their service in Greece, celebrating this important bond of friendship between Greece and Australia.