Our Committee is raising funds to create a lasting legacy telling the story of Lemnos' link to Gallipoli and Australia's Anzac story. Our projects include the Lemnos Gallipoli Memorial in Albert Park, the publication of a major new historical and pictorial publication and more. To make a donation you can also deposit directly by direct debit into the Committee's bank account: Account Name: Lemnos Gallipoli Commemorative Committee Inc; Bank: Bendigo Bank; Account No: 188010037; BSB No: 633000; Include your surname in the reference section. For further information on our legacy projects or to make a donation please contact either Lee Tarlamis 0411553009 or Jim Claven 0409402388M 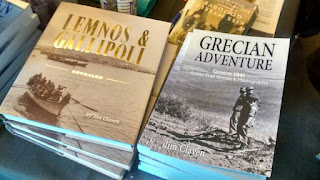 For all our supporters in Sydney - good news!

Sydney's magnificent Bilingual Bookshop is now stocking copies of our Lemnos & Gallipoli Revealed - A Pictorial History of the Anzacs in the Aegean 1915-16.

By purchasing the book you will not only be supporting our Committee's commemorative work but also this lovely local bookshop.

PS You can also get a copy of my Grecian Adventure - about the Greek campaign of 1941. 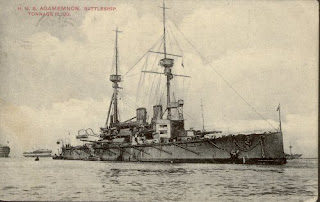 The Lemnos Gallipoli Commemorative Committee's annual service commemorating the Armistice of Mudros will be held on Monday 31st October 2022.

The service will be held in the Sanctuary of Melbourne's Shrine of Remembrance.

Attendees are requested to be present at the Sanctuary by 11.30am.

Members and supporters of the Committee will assemble at 11.15am at the Lemnos Tree and Plaque near the Shrine (near the main flagpoles on the Birdwood Avenue side of the Shrine forecourt) before proceeding to the Sanctuary.

A single symbolic wreath will be laid, with attendees invited to lay a poppies that will be provided.

All are welcome to attend the service.

The service commemorates the coming into effect of the Armistice of Mudros which was signed on 30th October 1918 in Lemnos' Mudros Bay aboard the HMS Agamemnon (pictured above). The Armistice came into effect at 12noon the following day, 31st October 1918.

The Armistice brought to end the war between the Entente Powers and the Ottoman Empire, a war that had begun on 11th November 1914, ranging over the Middle East, Eastern Mediterranean and Greece. For Australia, the war that had in many respects begun with the arrival of Australian troops at Lemnos' Mudros Bay had now ended there.

The Lemnos Gallipoli Commemorative Committee has held this service at the Shrine since 2019. This is the first physical service since the recent COVID pandemic.

This month saw a unique event held on the northern Aegean Island of Lemnos. For the first time the landing of the Australian nurses on Lemnos during the Gallipoli campaign in 1915-16 was commemorated at the location where the nurses came ashore on 8th August 1915.

Australian records and first-hand accounts have revealed that the first contingent of Australian nurses landed at what was referred to as the North Pier, a new pier erected by the Allied forces at the time to assist in the landing of service personnel and supplies during the campaign.

While the pier itself no longer exists, maps from the time held in London’s Imperial War Museum reveal that this pier was located on the edge of a small bay, near the causeway leading to the Church of Aghios Nickolaos, on the northern shore of the Turks Head Peninsula (commonly known as Pounda today). One photograph from the time, taken by the 3rd Australian General Hospital’s orderly and unofficial photographer Private Albert Savage, depicts the North Pier at sunset (see above). A number of other archival photographs also depict the North Pier and the surrounding area.

With the visit to Lemnos this August by members of the Lemnos Gallipoli Commemorative Committee (including myself as Secretary of the Committee) the opportunity was taken to hold an informal service at the site of the arrival of the Australian nurses. With the support of the Lemnos Municipality, a gathering was organised for 10am on Monday, 8th August.

Through Lemnos’ Australian “bush telegraph” a large group of Australian’s of Lemnian origin came together to commemorate this important event. The Koutsaplis sisters from Tsimandria – Liza, Angeliki and Haroula – played a large part in the organising and communicating the event. I thank them for their help. One of the attendees was Mark Menere, a relative of a Gallipoli veteran buried at East Mudros Military Cemetery. Those present include a number Melbourne’s Lemnian Community, including Bill and Aggie Georgantis.

The crowd gathered on the windswept site on the Turks Head Peninsula – exposed to the famous northern Aegean winds – as the nurses were in 1915. The service commenced with a short address by myself, explaining the historical background and significance of the event.

The nurses who landed were part of the 3rd Australian General Hospital, with their compliment of staff drawn from across Australia. They had departed Australia on the SS Mooltan and arrived in Egypt, their intended destination being the United Kingdom. However the mounting and unforeseen casualties at Gallipoli and the impending new offensives being planned for August, saw these plans altered and the nurses and their Hospital re-directed to first Egypt and then on to Lemnos.

They sailed into Lemnos’ great Mudros Bay on 5th August, anchoring amongst the large flotilla of military and other vessels associated with the campaign. Meanwhile the orderlies attached to the hospital had come ashore and began preparing the ground for the establishment of a field hospital, clearing the rocky and exposed ground on the hillside of the Turks Head Peninsula.

The writings of the nurses at anchor on their transport reveal their eagerness to come ashore. Trained as professional nurses and having volunteered for military service, the nurses were keen to get to work treating the injured and wounded soldiers that they had enlisted to help.

The Matron of the 3rd Australian General Hospital – Brisbane’s 35 year old Grace Wilson - wrote in her personal diary of the whole Bay being “beautifully lit up – all the boats and all the camps ashore.” She noted that the Island did not look as barren as they had expected, with patches of green here and there, with some trees. She also noted to the villages on the shore, with the soldiers camps stretching “for miles”. One nurse from Adelaide – 31 year old Staff Nurse Lucy Daw – wrote in her diary of the amazing scene that confronted the nurses in Mudros Bay – the many ships of all types, large and small, warships and transports, all jostling for space in the crammed harbour. Matron Wilson thought the hospital ships looked beautiful, “like a beautiful emerald bracelet with a ruby centre.”

Finally in the early evening of the 8th August the order was given for the nurses to come ashore. The records reveal that they did so at the North Pier, transferring from their transport to smaller vessels which brought them to the pier. These first nurses to land, including Matron Wilson, would be joined over subsequent days and weeks with more Australian nurses, until they totally around 130 nurses. They would serve alongside medical officers and the hundreds of male orderlies required to keep the hospital functioning.

From here the nurses proceeded across the small bay to the west and up the rise to the location of the Hospital. It was during this journey that the nurses were also famously photographed by Private Albert Savage. We see them formed up into marching formation, Matron Wilson at the front, all led by the Hospital’s Scottish piper, Warrant Officer Archibald Monk from Island of Benbecula in the West of Scotland. Beyond the tents behind them, we can see some of the ships in Mudros Bay. It is this iconic photograph, capturing the Australian nurses as they arrived on Lemnos that the Lemnos Gallipoli Commemorative Committee has gifted to a number of institutions – including the RSL Headquarters in Melbourne and the Oakleigh-Carnegie RSL Sub Branch to name a few – and which are on display to build awareness of the role of Lemnos in the Gallipoli campaign.

We know that their evocative arrival was soon overwhelmed with the flood of casualties from Gallipoli. Their medical equipment and supplies having been sent elsewhere on another ship, the nurses at the hospital struggled to treat their patients. Yet the medical conditions slowly improved, the hospital achieving a remarkable success rate.

The commemorative service concluded with the laying of a symbolic bouquet of flowers at the site in recognition of the Australian nurse’s service on Lemnos, followed by an exploration of the site of the North Pier and the surrounding area.

There is no commemorative memorial or marker at this site. A few years ago the descendants of one the Australian medical staff who served on Lemnos presented the Lemnos authorities with a commemorative plaque dedicated to the presence of the 3rd Australian General Hospital. This has been installed further inland from the site where the Hospital nurses landed. It is hoped that a commemorative marker or memorial will be erected at the former North Pier site to assist commemorative visitors to Lemnos.

The Lemnos Gallipoli Commemorative Committee thanked the Lemnos Municipality for their support of this inaugural event as well as all who attended the service.

Jim Claven is a trained historian, freelance writer, published author and Secretary of the Lemnos Gallipoli Commemorative Committee. For those seeking more information on the North Pier and the arrival of the Australian nurses on Lemnos are referred to his pictorial history of Lemnos and the Gallipoli campaign, Lemnos & Gallipoli Revealed, published in 2019. He thanks all those Australians of Lemnian heritage who took part in the commemorative service, the Koutsaplis sisters of Tsimandria for their help in organising the event and photographer Pat Miner for his photographs of the service. He can be contacted via email – jimclaven@yahoo.com.au

This report was also published in Neos Kosmos, click here.