From Asia Minor to Anzac - The Odyssey of Peter Rados, Neos Kosmos

One of the first hand accounts of Lemnos is that of New Zealand officer, Major Percy Edward Cox. His Gallipoli Diary records his experiences from joining up in October 1914 until August 1915.
The Diary also records some references to Lemnos. Below are some excerpts:


Wednesday 14/4/15.
At 6 am. entered the splendid harbour of Lemnos. Piloted by a torpedo boat destroyer. The
harbour is practically full of transports, colliers, and naval craft. The latter includes 1 Russian & numerous French ships, the whole fleet being headed by the splendid & formidable looking battle cruiser  Queen Elizabeth. The inner harbour is protected from submarine or other attacks by a boom of nets & mines across the narrows thro' which we passed. It is rumoured that we may be here a couple of weeks owing to our having to wait for more troops which are necessary to our operations…. A few houses & military camps are to be seen ashore round the scantily grassed slopes of the surrounding hills. Lemnos appears to be an ideal Naval base & the British authorities were exceedingly shrewd in securing this new outpost for the Empire.
…
Friday 16-4-15
Our ship's company went ashore in boats for a short march & returned in the afternoon.
I went also & had a look round the villages. They are very crude - made of stones
& plaster and practically all inhabitants are Greeks. Island of Lemnos is about 50 miles
in length. — Soil is rather poor but cultivated on flats and it was grand to be
able to work on grass land — the first since we left N.Z. except of course for the
ornamental grounds of Egypt. Fine spring weather much like N.Z. in spring.


To read the full Diary, go to the Victorian University of Wellington New Zealand website by clicking here. 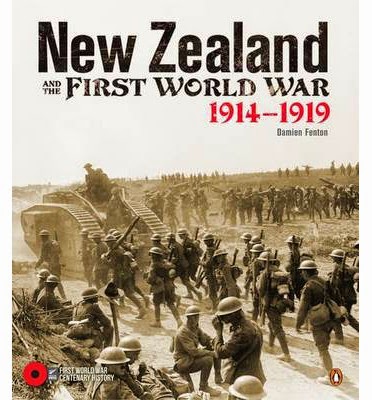 New Zealand soldiers fought alongside Australian troops at Gallipoli as part of the Anzac formations and served on Lemnos.
This new history of New Zealand has been published in 2013. By Damien Fenton, the book is an official publication.
The Following description is from the Book Depository:
The first of its kind for New Zealand - a lavish, landmark production - New Zealand and the First World War dynamically illustrates 50 key episodes of our wartime life. Featuring over 500 images, many previously unpublished, the book comes with a host of memorabilia including fold-out maps, posters, booklets, letters, and postcards. The complete story of New Zealand's war is brought to life in dramatic detail - our front-line experiences overseas as well as those on the home front, from the outbreak in 1914 to demobilisation in 1919. This terrible conflict was not restricted to faraway battlefields like Gallipoli and Passchendaele - it had an unparalleled impact on New Zealand society, touching nearly every family, every street and every community. Until now, no single history has explored New Zealand's role in the First World War with such breadth and colour. A defining history for a new generation.
Jim Claven
Secretary
Lemnos Gallipoli Commemorative Committee

For all those watching the great new ABC TV drama series, Anzac Girls, you'll be glad to know that they have based a lot of the story and the images shown on the actual story and photographs taken by the Anzac soldiers and nurses on Lemnos in 1915.
This page reproduces some of the images that resonate with scenes in the series.

The ABC has also established a web story, backgrounding the history of the Australian nurses in WW1, including on Lemnos, to read it click here.
It's great to see Lemnos has finally been recognised in this major drama series. We hope it will spur greater interest in Lemnos' role in Australia's Anzac legend and support for fitting commemorations of this in Australia, Lemnos and Greece.
Thank you to the ABC for making this wonderful drama series.
Jim Claven
Secretary
Lemnos Gallipoli Commemorative Committee

For all those who are watching the ABC series, Anzac Girls, you may have noticed the shots of the nurses of the 3rd Australian General Hospital "being piped" to their new base on Lemnos.
This is a true story, as the above photograph shows.
The first forty nurses of the hospital went ashore on the 8th August, having sailed from Alexandria. The remainder, pictured above arrived the following day, 9th August. Both groups of nurses landed at the North Pier, on the Turks Head peninsula. While the first group of nurses were met by the commanding officer of the hospital, Colonel Fiaschi, the second group were met by the second-in-command, Lieutenant Colonel William Dick
Lieutenant Colonel Dick reported that both groups were piped onto Lemnos by the regimental piper of the 3rd Australian General Hospital. While we don't what the piper was playing, one historian reports that he was playing highland laments.
According to one of the nurses:
"We were met at the pier of West Mudros by a staff sergeant with bagpipes!! To play
us into camp."
As historian Jan Bassett has written, clad in their ankle length uniforms, they were lined up in rows of four, beside the pier where a lone soldier stood guarding some onions. The nurse continued her story of their marching.

"I must say we made a hash of the job. We had forgotten whether the odd or even numbers moved so to be on the safe side we all moved!!"

Dogs barked and men cheered as the nurses marched across several kilometers of rocky ground to their hospital site.
This attempt at imposing a military formation on the arriving nurses was the idea of the 3rd Australian General Hospitals' commanding officer, Colonel Fiaschi, another Boer War veteran, and not well received according to Jan Bassett. Colonel Fiaschi's period on Lemnos would prove to be controversial.
Who was the Piper of Lemnos?
The piper who piped the Australian nurses as they arrived at West Mudros on Lemnos was Warrant Officer 4430 Archibald Monk.
Archibald was an Islander himself, hailing from the Scottish Island of Benbecula, the Island connecting North and South Uist in the Outer Hebrides. Inhabited by Gaelic-speaking people, the Island is called Beinn na Faoghla in Scots Gaelic, which means Mountain of the Ford.
Archibald had served as a Sergeant in the Cameron Highlanders before emigrating to far-off Australia. He worked as a hospital attendant in Australia and that is probably the reason he was enlisted into the 3rd Australian General Hospital. He enlisted in March 1915 at Liverpool, NSW. He was 29 years old.
The hospitals on Lemnos became so riven with the diseases of the peninsula that even poor Archibald was hospitalized with dysentery twice -in September and in December.
But thankfully, he survived the First world War.
Archibald must have enjoyed playing his bagpipes on Lemnos - the lilt of the pipes, carried across Mudros Bay and the surrounding hills would have been a familiar sound on his far off homeland of Benbecula.
Maybe his thoughts drifted to his native Island, as he played to the nurses from Australia.

The Nurses arrive - and so do the patients
The arrival of the nurses had been preceded by the rest of the hospitals staff - but sadly for them and their patients - their much needed medical equipment and supplies did not arrive until 22nd August.
This was well after the first hundreds of patients arrived for treatment following the August Offensive on the peninsula.
As historian Susanna de Vries has written, when the nurses arrived at the hospital site on the Turks Head peninsula they were shocked at the lines of wounded men in blood-stained uniforms lying on the bar ground.
Some 150 casualties greeted the nurses on their first day. As the diary of Matron Grace Wilson records:
"(9th August) Found 150 patients lying on the ground - no equipment whatsoever - did best we could - have tents ourselves but no beds or mattresses. had no water to drink or wash.
(10th August) Still no water, had some tea, could not wash or brush our teeth - had a bathe but water is very dirty. Convoy arrived at night andusedc up all our private things soap etc, toere up clothes etc.... (11th August) Convoy arrived, about 400 ... It's just too awful..."
By the 13th August, the nurses were having to treat some 800 patients.
And so began the nurses - and patients - ordeal on Lemnos.
Anzac and Bagpipes
Bagpipes were a feature within a number of the Australian Imperial Force formations during the First World War. 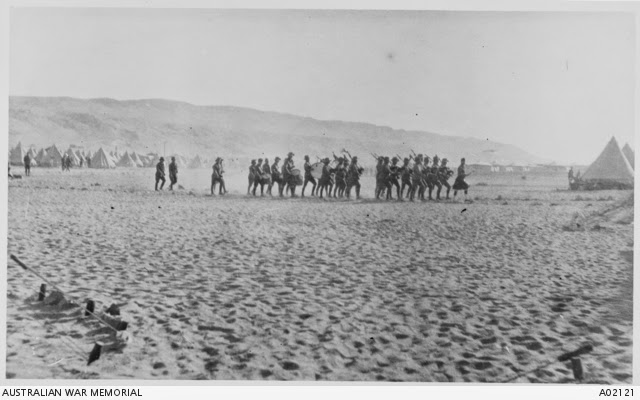 This photograph shows the regimental pipe band of the 3rd Australian Infantry Brigade, practicing at the great Anzac Camp, at Mena in Egypt in 1915. 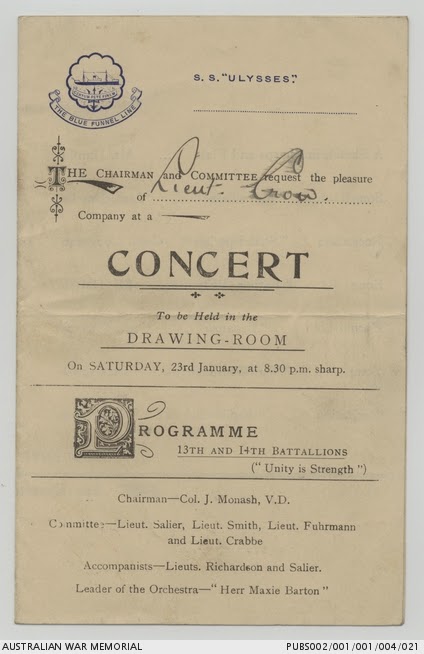 Above is the souvenir program for a concert held to entertain troops on their way to Egypt, Lemnos and Gallipoli. This program is for a concert held aboard SS Ulysses at 8.30pm on Saturday 23 January 1915. The concert featured the 13th and 14th Battalions. The cover of this program features an invitation to attend the concert and has been addressed to Lieutenant Crow. The back cover of the program features a Tudor rose, a Scottish Thistle, a shamrock and a man playing the bagpipes above a kangaroo and the words 'Australia will be there!' 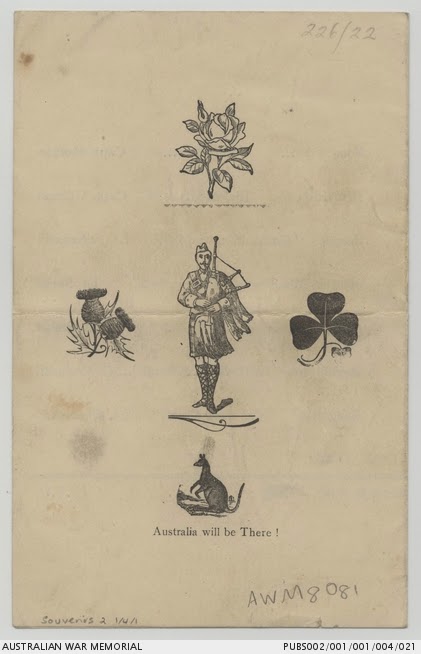 The back of the program features a piper too.
It is also recorded that the arrival of one of the last Australian Units to be evacuated from Gallipoli in December 1915 - the 13th Battalion - was welcomed to Lemnos by the pipe band of a Scottish regiment stationed on the Island. This is quoted in the historian Robert Holden's new book, And the Band Played On - How Music Lifted the Anzac Spirit in the Battlefields of the First World War. 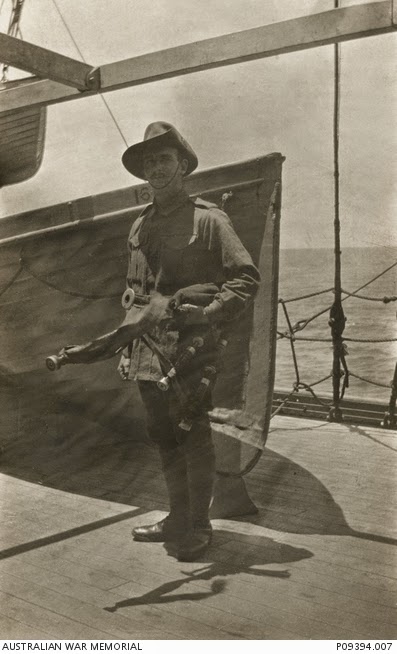 Informal portrait of 4235 Private (Pte) Robert Dodds Stewart, 28th Battalion, holding a set of bagpipes. This is probably aboard HMAT Ulysses (A38) on the voyage from Australia. Pte Stewart was later killed in action at Pozieres on 20 July 1916. 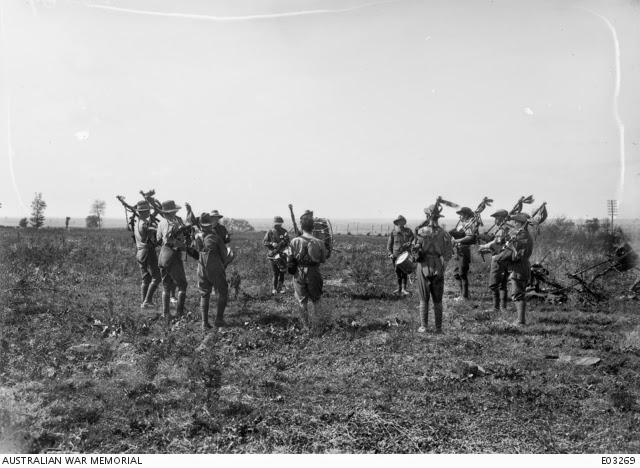 As we say in Scotland - Scots Wha Hae!