Dr Peter Ewer
Dr Peter Ewer is an Australian historian and author.
He is published in internationally renowned academic journals the Journal of Military History (University of Virginia). He has also published in the Journal of Transport History (University of Manchester Press, UK), and a range of local history journals, including Australian Historical Studies (University of Melbourne).
Forgotten Anzacs: the campaign in Greece, 1941, published in 2008, was the first extensive re-examination of the Greek campaign since the publication of the official histories in Australia and New Zealand in the 1950s. The revised edition of the book published in 2016, incorporates fresh archival research into British planning for the campaign, shedding new light on the ANZAC contribution to the defence of the Greece.
Peter served as the historical advisor to the 42nd Street Memorial Trust, the community organisation that built the memorial at Tsikalaria Street, Tsikalaria, Crete, to commemorate the fighting there on 27 May 1941, and unveiled by the New Zealand Governor General on 19 May 2016.

This presentation is sponsored by the Battle of Crete & Greece Commemorative Council.
Attendance is free, all welcome.
Information supplied by The Greek Centre and Dr Peter Ewer.


One of the curious ways that the Island of Lemnos has been remembered and its connection to the Allied soldiers who served there in 1915 is in the names given to future generations.
Today I have discovered two Allied soldiers who served in the Second World War - one Australian and the other British - who include the name of Lemnos in their own names. One wonders what their parents were thinking when they included the name of this Greek Island in the names of their newborns. There is no soldier with either surname buried in either of the two military cemeteries on Lemnos.
But nevertheless to me it is obvious that there must have been some family connection to Lemnos and its role in the Gallipoli campaign. Maybe their father had served on Lemnos or been cared for in its field hospitals in 1915. Lets hope we can find out more about why these soldiers were named Lemnos.
The details of these soldiers are listed below:
Private Charles Frederick Lemnos Power
A soldier with the Second Australian Imperial Force, he was the son of Thomas and Mary Arm Power of Merbein South in country Victoria. His service number was VX47054 and he served with the 2/29th Battalion. He died on the 22nd January 1942, aged 23 and his name is written on the Singapore Memorial.
Gunner Jack Lemnos Gladish
British Gunner 1591274 served in the 433 Battery of the 131 Light Anti-Aircraft Regiment, Royal Artillery. He was the son of Lilian Gladish and the wife of Vera, of Histon, England. He died on the 17th September 1944, age 28, and is buried at the Cambridge City Cemetery. 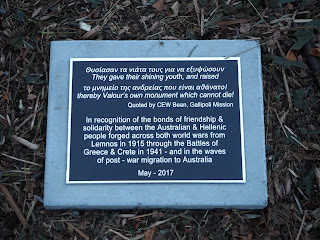 Recently the co-chair of the Victorian Parliamentary Friends of Greece, Mr Steve Dimopoulos MP for Oakleigh, made the following Statement in recognition of the recent planting of an olive tree and unveiling of a memorial plaque in the grounds of the Victorian Parliament.
This new memorial space honours the Anzac connection to Greece and the connections between Greece and Australia through the waves of post war migration.
Below is the text of his statement.

"Mr DIMOPOULOS — I was proud to take part in the ceremony to plant an olive tree in the gardens surrounding Parliament House. This tree recognises the enduring friendship between the Australian and Hellenic people both during war and peacetime. I would like to make special mention of the Parliamentary Friends of Greece, the Battle of Crete and Greece Commemorative Council, in particular Tony Tsourdalakis and Larry Irwin, and the Lemnos Gallipoli Commemorative Committee, in particular Jim Claven and a former member of the other place, Lee Tarlamis. I would also like to thank Lieutenant General Konstantinos Floros, deputy chief of the Hellenic National Defence General Staff, the Consul General of Greece in Melbourne, Christina Simantiraki, and the many other dignitaries for assisting and taking part in the ceremony. May this olive tree be a lasting memorial to the peaceful and long-term friendship between Australia and Greece and their peoples."
If you would like to download a copy of Mr Dimopoulos' Statement (on page 1851 of the Hansard document), please click here.

The Committee thanks Mr Dimopoulos for his Statement and support for this important act of commemoration. 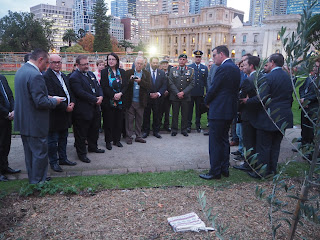 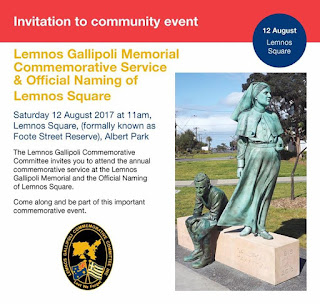 As the President of the Lemnos Gallipoli Commemorative Committee I have the pleasure of inviting you all to our annual Commemorative Service at the Lemnos Gallipoli Memorial.
This Memorial commemorates the nurses, diggers and local Lemnians who came together in 1915 during the Gallipoli campaign. It is a permanent reminder of the enduring relationship established between Australia and Greece which has only gained in strength through the decades.
It also raises awareness of the Hellenic connection to the Anzac's. This years event will also feature the official naming of 'Lemnos Square' which is a significant achievement.
The last time a location was named after Lemnos was in 1927 when the soldier settlement town of Lemnos was established in Shepparton. Everyone is welcome.