99 years ago today, on the 30 October 1918, the Armistice of Moudros was signed on board the HMS Agamemnon in Moudros Harbour on the Greek Island of Lemnos.
The Armistice between the defeated Ottoman Empire and the Allied Forces ended the hostilities which started in the Dardanelles and at Gallipoli and was signed by the Ottoman Minister of Marine Affairs, Rauf Bey, and British Admiral Somerset Arthur Gough-Calthorpe.
The armistice was signed in the waters that sheltered the three war cemeteries containing the dead from the campaign in 1915 - at the Commonwealth Cemeteries at East Mudros and Portianou and on the Turks Head Peninsula, where the Muslim cemetery lies containing the graves of Ottoman prisoners of war who died on Lemnos in 1915.
The significant event of the signing of the Armistice in Lemnos was fitting as this was the location where the war in this region had begun. During these hostilities Lemnos was the principal assembly, embarkation and supply point for the Gallipoli landings and Moudros Harbour was a major staging post for naval operations.
It was the location of soldier rest camps and two Australian field hospitals and where the first overseas deployment of Australian Nurses to a war theatre took place. In fact there were over 130 Australian nurses on Lemnos during the Gallipoli Campaign and many more on the hospital ships in the harbour.
Plans are already underway for next year's 100th Anniversary of this significant event both in Lemnos and Australia and the Lemnos Gallipoli Commemorative Committee will keep you informed of these events as they develop.
The commemoration of this event occurs a few days after 'OXI' Day and less than two weeks before we commemorate Remembrance Day. On these and other important occasions we take the time to commemorate and acknowledge the sacrifices of those who fought and died for the freedoms that we enjoy today. Lest we Forget.
Lee Tarlamis
President
Lemnos Gallipoli Commemorative Committee 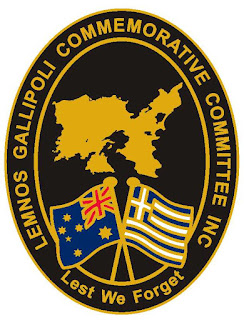